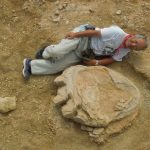 Ulaanbaatar- A joint team of researchers from Japan and Mongolia has unearthed what could be termed as the largest dinosaur footprint which measures almost the size of a man. The footprint is believed to be of a species of dinosaur named Titanosaur which roamed in this part of Earth nearly 90 million years ago.

Researchers from Okayama University of Science and Center of Paleontology under the Mongolian Academy of Sciences unearthed what could be the world’s largest footprint of a gigantic dinosaur. The footprint is 42 inches long and 30 inches wide.

In the past also some footprints of dinosaurs were discovered in the Gobi desert in Mongolia. However, this is the biggest footprint of a dinosaur and was from a geological layer which hints that it could be 90 million years old also.

The discovery is significant because for the first time a fossil foot with clear imprints of its claws has been found. The footprint cast is natural and could have been formed when the massive creature tramped on the slushy ground and sand flowed into the vents. The dinosaur could be 30 meters long and 20 meters tall.

Titanosaurs were herbivorous reptiles, and the babies could weigh 3 to 4 kilograms. The baby becomes sexually mature in 20 years. The herbivore had the longest neck among all creatures of those times. Scientists now hope that they will be able to find a complete skeleton of the Dinosaur in Mongolia.

However, this does not decrease the importance of the footprint. A careful study will give important clues about how the gargantuan creature walked. It will also help to deduce the structure of the limbs of Titanosaur.