A team of astronomers has discovered a new planet that has three Suns. The three-star system is located 685 light years away. What’s striking about the trio is that they appear like three dancing balls in the sky giving a stunning look. According to scientists, the planet is habitable and boasts very high chances of supporting life. Only three such systems had been discovered by the scientists in the past.

After further analysis, researchers revealed that the stable planet also known as ‘hot Jupiter’ technically revolves around the Sun KELT-4A and other two stars KELT-4B and 4C are pretty close to the primary star. Although, the other two stars are relatively closer but still they are eight times farther than Pluto is from our own sun and it takes them 4,000 years to make the trip around KELT-4A; KELT-4B and -4C orbit each other every 30 years.

While explaining the sunset, scientists said that the sunset at KELT-4Ab is 40 times brighter than our Earth. In addition, a person standing on the hot Jupiter would also see two small stars with a brightness similar to our Moon roaming around the central star. Such a system is so rare that scientists have found only four such three star systems in the universe till date.

“The binary system KELT-4BC may be what ultimately drove the planet KELT-4Ab so close to its star,” the study’s lead researcher, Jason Eastman, a researcher at the Harvard-Smithsonian Center for Astrophysics.

“Gaseous planets the size of Jupiter are supposed to form much farther out [from their parent star] and stay there, like our own Jupiter did,” said Eastman. “Exactly how they got so close is an outstanding question, but one theory is that it migrates due to hot interactions with a third body — in this case, the third and fourth bodies KELT-BC.”

Further analysis of such systems will reveal key information about the formation and evolution of such stunning systems.

The study appeared in the Astronomical Journal. 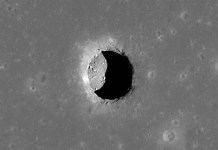 Elon Musk Reveals About Mars Mission, SpaceX to Send Humans on the Mars by 2024

The Indian Tribune Staff - November 15, 2017
A team of European Union researchers has discovered a Dinosaur-Era shark. It has 300 teeth and snake-like head. The team has found it at...

NASA’s Trip to Mars: Over 1.3 lakh Indians book tickets to...

Chinese Space Station May Crash into a Major City - New...

Artificial Intelligence is a threat to humanity: Stephen Hawking