The SecureTeam10 who is popular for its YouTube channel has uploaded a video which claims that an alien tank is found on the surface of the moon. However, it could be an oddly shaped rock.

The UFO researcher says that this rare object on the moon’s face could be a ‘Tank’. This might be left by an unknown civilization.

US space agency NASA has spotted this rectangular shaped object which is 30 meters long. The UFO team claims that it could be an army tank on the top.

The secure team briefing the video said that the tank like an object which has been discovered on the moon appears to be ruins of some short. They also have another view on this and said that this could be an oddly shaped rock as well.

The SecureTeam 10 have got more than 785,000 subscribers and famous for covering the conspiracy news on the internet. However few critics have claimed that the video is not perfectly accurate. We should not jump into conclusion unless it cleared by some expert agency. The channel defines itself as a source for covering best and rare news related to UFO. It covers the mysterious activities which are happening on our as well as another planet.

Further, this video also shows the tracks on the lunar surface. Although, expert’s view differs from them. They did not say whether the tank shaped object and the tracks were connected.

Tyler Glockner who belongs from the SecureTeam said that tank like object could be an oddly shaped boulder. He further added that we want you people to notice the mysterious nature of this object. If you take a look from bird’s eye view, it looks similar to a tank. On the top view, it shows almost similar features of the tank as we see on our planet. He says if this is a tank then clearly it would be ancient. The images also show a disc like an object stabbing out of the surface. 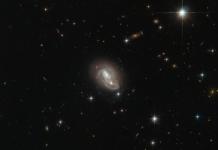 Hubble Telescope Captured Images of Galaxy Duo by the ‘Hare’

Zomato Hacked - Credit Card and Other Payment Data are Safe:...

Anvi Singh - May 18, 2017
Zomato, the online restaurant guide and food ordering app got hacked on Thursday. They informed the public on this matter through its blog. In...