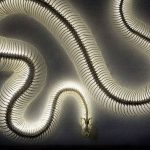 In a significant development, researchers have discovered a wide range of new species of elusive pale grey cat-eyed Ghost snake in Madagascar. According to scientists, the presence of the pale grey snake is difficult to locate since it remains elusive.

Originally published in the journal Copeia, the location of the discovery is the native home to a common group of snakes named Madagascarophis. They are also named as cat-eyed snakes. This is because of the fact that their vertical pupils were fairly active in the evening or night. Commenting on the discovery, Sara Ruane, post-doctoral researcher at the LSU Museum of Natural Science disclosed that none of the snakes in the particular region has such distinct patterns neither snakes are such pale as this one. They are unable to find any snakes in Madagascarophis that are as pale and none of them have a distinct pattern as the currently discovered one.

In the meantime, researchers found a closest relative to the discovered snake namely Madagascarophis fuchsi. It was found nearly 100 km north of Ankarana several years ago in rock isolated area. According to sources, it took researchers several years to unravel the mystery behind this new species due to the peculiar characteristic feature of the elusive nature.

Ruane added that cat-eyed snakes could be considered one of the most common groups of snakes in Madagascar. However, there will be several new species like this because of the lack of knowledge in the region. Moreover, the area is poorly explored by researchers.

Furthermore, the new snake species are mainly active in rainy season since they hunt for the frog, lizards, and other smaller snakes.